It’s that time of year when I start to make a list of everything that can be harvested this month or that I have in storage just to make sure that I use it. I hate getting to March/April and finding that I have squash that have rotted or potatoes that have sprouted because I haven’t used them in time. I walked around the allotments and made my list and then took it home to plan the menus for the week. It really cuts down on the shopping list and time I spend faffing around thinking about what to eat. 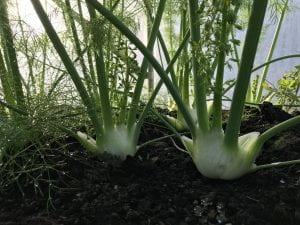 So for a sausage casserole today one of the things I  picked was some fennel. I have settled on growing Rondo as it seems to be slower to bolt and grows well both outdoors and in the polytunnel. The outdoor fennel is finished so it is on to the first group grown in the polytunnel. I have a second group but they are for next year as they are still very small at the moment. I have always wondered what to do with the fronds as it seems such a waste but a friend showed me a recipe for fennel pesto and to that is now in the freezer ready to use when we next have pasta. 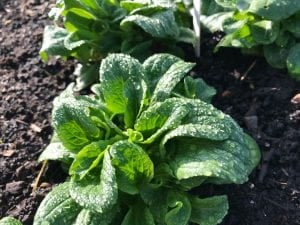 If it isn’t too cold we still have a salad at lunch time. If it is cold we have soup, but today was a sunny, bright-blue-sky type of day so to bulk out the lettuce, landcress and rocket, I picked some lambs lettuce.  This is Favor and in my normal, slightly slapdash way, I am not sure where I got the seed from. I buy as much seed as I can from Kings because we do this as an allotment association and get the seed quite a bit cheaper. However, as I am on a seed saving mission, I bought some from companies that sell open pollinated varieties especially so that you can save the seed such as Real Seeds, Vital Seeds and The Seed Cooperative.  I’ll save some seed and see what happens anyway.  Favor has quite big, dark green leaves and grows into a dense, compact plant so we only need two of the plants for the salad.

The celariac, Prinz,  needs harvesting. Last winter I left it in the ground as I am in the south and the winters are mild but the woodlice got into them and were a complete nuisance, going right into the middle of some. Charles Dowding harvests all his in November and stores them in a cold shed so I will do the same.

I have also harvested a LOT of twiggy peasticks and bean poles this week by coppicing the hazels on the wildlife plot. I can probably provide supports for all 300 allotments as there were about 9 hazels which had not been cut for quite a few years. Some of the wands are more than 5m long. I will write more about this during the week.

What is really good in your garden at the moment?