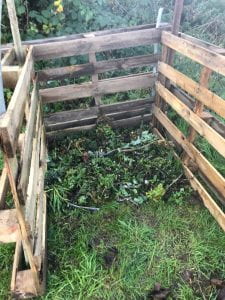 I have become obsessed with compost this winter. I think it is because I don’t dig, just put compost on top of the beds each year. I garden on sand so the normal 3-5cm placed on top of the bed is not usually enough to last a year and so I go for 5-7cm+ and I never have enough!

By the end of the year on beds where I have added less it looks like nothing, zero, nada has been used.

I make compost in three ways and use each slightly differently: cold compost, hot compost and worm compost.

The cold compost is the way I usually make compost – I just fill up my compost bays and wait a year or slightly less to use it.  I didn’t realise that this way of making compost was also called the Lazy Method but having just started to make hot compost, I can see why it is called that.

This video from Huw Richards explains exactly how I make it apart from the jumping up and down on it.

The advantages of this method for me are that it involves less work, I don’t turn it at all and I put all the couch grass and roots and bindweed in it and they do not cause a problem. I also put all my tomato and potato plants in blight or not as blight is an air borne disease not soil borne.  The disadvantages are that my heaps do not get hot enough to kill all the weed seed and so, I get weeds germinating when I spread the compost. The answer would be to remove all the weeds before they start to flower and every year I try but fail at some point.

Charles Dowding also makes compost in this way but turns his twice. Once into the next compost bin and once when he moves it and stores it ready for the winter-time spreading.

Then there is hot composting which I am trialing at the moment.  I make this and use it on specific beds because I don’t have any other compost left and only have to wait 18 days to make and use it this way – in theory. It’s not turning out like that at this time of year but it might also be that I haven’t refined what I need to do well enough. This video by Richard Perkins shows the Berkeley process really well and having watched it, I can see where I have gone wrong!

The advantages of this type of compost are that it is quick and weed seeds are killed. The disadvantages are that it is a lot of work turning the pile every two days, especially when the pile is not in the back garden. The other disadvantage is that I am struggling to get enough green stuff at this time of year (winter) and in summer I may struggle with the brown stuff.

The final type of compost I make is worm compost or vermicompost. I make this at home where I have two specially made bins.  This video by Geoff Lawton shows how to make worm compost on a large scale and I would like to try this on the allotments if I can find an old bath.

The advantages of this method of composting are that you get the two products – a liquid feed and compost or really a fertiliser that you can use on plants that need it or things like tomatoes, cucumbers and aubergines. The disadvantages are the scale of manufacture – my two bins don’t produce anywhere near this amount and the worms do need insulating during winter as they stop working/die if it is too cold.

You can try worm composting on a very small scale with a worm tower. I might give this a go near to a plum tree which I have recently had to move and put in soil which does not look to have had much added to it in the way of compost in the last few years.

How do you make compost and can you make enough?