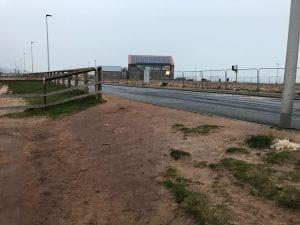 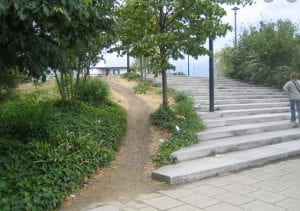 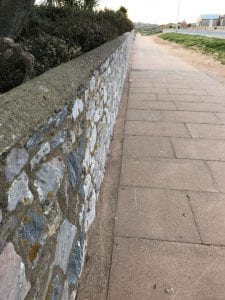 Patterns on a plot of land

We’ve been studying patterns and all of a sudden, they are everywhere. It really is about looking through a filter and although I am not very good at it yet, I am definitely noticing more than I did before. 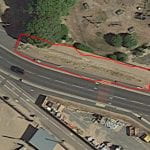 The plot, outlined in red here, is across the road from the beach and is part of a big pattern of sand dunes created many years ago. From the 1880s onwards the land was used as as a links golf course and some of the bunkers can still be seen.

A road then divided the course from the beach and with pavements and play centres built, the dunes became part of the built environment, parts often becoming separated from each other.

But whilst the sand dunes no longer have access to the sea, they are still building and being blown away in minature on the plot of land.

The sand dune that constitutes this plot of land is at the end of the yellow dune and the start of the grey dune phase. It is definitely no longer mobile but the main plant growing on it is grass which is stabilising it. 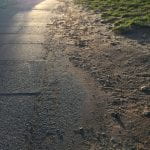 The first pattern obvious when you move down onto the lower pavement is one of a wave alongside the edge where the sand meets the pavement. Whilst edges are some of the most productive places, this one doesn’t seem to be but I think that is probably because people walk on it because the pavement is not wide enough for groups. 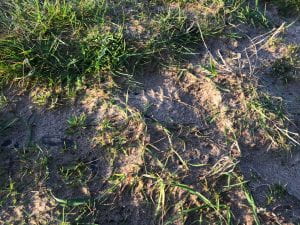 In order for sand dunes to be made, you need two media, sand and wind, where the wind  blows sand, deposits it and then blows it away again. In geographic terms, deposition and erosion. Whilst the dunes behind the beach are quite stable, this piece of land has mini dunes on it. The wind blows the sand which gets trapped by the grass on the land and is then eventually blown off, hitting the wall opposite it and deposited at the base of the wall. The ripples in the sand come from the patterns on the base of trainers rather than anything nature has created. Although hard to see, the pattern is again a wave pattern. 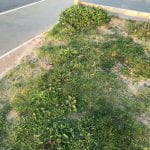 Here, the sea beet is moving out from the fence post which offers some protection from the wind in a scatter pattern relating to how the seed has fallen, almost in an explosion pattern.

A book I am reading to gain more knowledge about reading the land is How to Read the Landscape by Patrick Whitefield.

Managing water on the allotment – part1

Winter is a quieter time on the allotment in terms of sowing and planting but not in terms of planning.  After a couple of hot summers I know that I  do not collect enough water when it does rain. I have 4 water butts on my polytunnel, one at each corner and one water butt behind my shed and can empty these in about two weeks if it is very hot.  Water butts are not the only way of saving water and I can’t have the plots covered in blue butts so need to think about other ways of too.

This is the first in a series of posts about  water management on my allotments.

I like the permaculture phrase about water of slow it, spread it and sink it as it rains with this being the number one way of managing water. The cheapest method of storing water is to store it in the ground.  The secondary aim is to capture as much water as is reasonable to use during dry periods. How you use these strategies completely depends on the site.

Things to think about are:

We also need to consider all the ways in which we can sink, slow and spread water across the allotments. The following are a list of things we could do – some may not be appropriate but at this stage I don’t want to rule anything out.

How do you store water in your soil so that you can make the most of this resource?