The biggest bang for your buck with bees (and other pollinators) 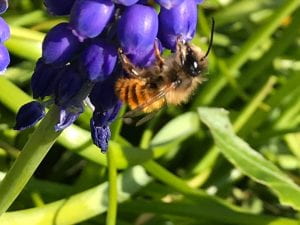 I have been looking a lot at lists of plants for bees and butterflies because I made myself a promise that this year I would add plants to the wildlife plot so that  there would at least one more that flowers each month.

So many people have lists and they each have different plants on them which I think suggests that actually it is quite site specific and what bees in one part of the country go for is not always the same across the country. Lists that I use are:

Bang for your buck!

So, what has proved most popular on the Exmouth Hamilton Lane wildlife garden? In March and April, the plants that have had the most pollinators are: 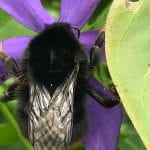 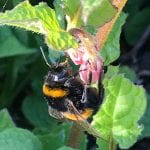 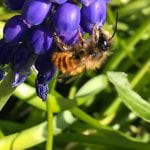 Something unidentified yet on the grape hyacinth

Perennial vegetables for the wildlife plot 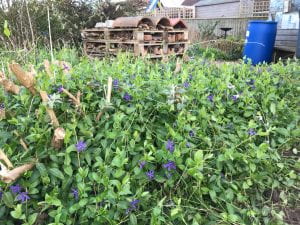 I have two goals this year for the wildlife garden on the allotments. The first is to sort out the bed under the apple tree.  It has become overrun with vinca, which has run half way down the plot and will run down the other half if I don’t take action now. 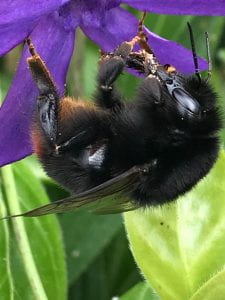 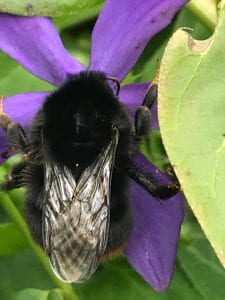 As I was digging it up, I had the company of a red-tailed bumble bee proving that the flowers are very useful early in the season for insects. This helped me make the decision to leave a reasonable sized clump but to keep it strictly under control. Once some of the vinca was removed I found a gooseberry, 5 strawberry plants, potentilla, mock orange, acquilegia and a large clump of geranium.

The second action is to plant perennial vegetables on the plot. I haven’t got the time to sow and look after more annual crops but sow and plant perennials once and they are then there for good.  I have some cuttings from my perennial kale that I took in the autumn which have taken so one or two of those can go in but I need more than that.  Below is a list of veg that I will start to collect:

On most of the sites that focus on perennial vegetables the flower day lilies appears with everyone saying how lovely the flowers taste.  I have day lilies in my garden so will divide them and bring some to the plot and try them this year.

Do you grow any perennial vegetables that you would recommend I grow?

The invasion marches on 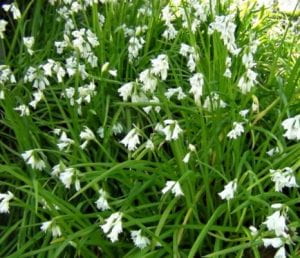 I have lived in my present house for 20 years now. When we first moved in there was a pretty white flower that was tucked around the edges of the garden in shady parts. I left it for about three years until one day I realised that it was all over garden and had spread incredibly. In fact, it was taking over.

The plant was Allium triquetrum, also known as Snowbell, three-cornered leek or onion weed. I came to call it something much ruder!  It has taken me 15 years to get rid of it and I am now at the point where I might find one or two in planting that I haven’t changed since I moved into the house.  Imagine my horror when I discovered that at the bottom end of the wildlife garden (see how I got this here) the two beds are overrun with it. I know it is because the first leaves start to come through in October and continue to about April/May when the plant flowers.  I started to dig it up but realised once I had filled three compost bags with the blighters from one small corner that I needed to think about this problem. 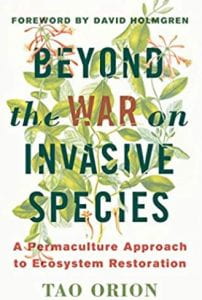 I recently read Beyond the War on Invasive Species: A Permaculture  Approach to Ecosystem Regeneration by Tao Orion. It is not a ‘light’ read but the basis of the book is that using multiple applications of weedkiller at regular intervals is surely not the way to remove invasive species and regenerate land.  Permaculture offers a different way based on its ethics and principles and we should be taking a slightly longer and more considered view. I don’t know if I would agree if Japanese Knotweed were damaging my  house but in this instance, I can afford to take a different view. Tao Orion offers 4 phases to dealing with an invasive species: Turn on the macroscope, complete a site assessment, make a plan and then implement it.

What follows is my plan for dealing with the plant over the next 5 or more years.

Phase 1 – Turn on the macroscope

Here we need to stop looking at the plant and consider the ecosystem it finds its self in and try to develop a deeper understanding of why the plant is there. Orion suggests doing this over the course of a year.

The allium is growing in a couple of beds that contain trees – mostly cherry and hazel but some euonymus, holly, an apple tree and a hawthorn. The cherry trees have suckered because the original ones have been pruned and on a quick count I found 12 suckers in a bed that is probably not much more than 2m by 3m. They are all more than 3m tall.

The bed is in deep shade because of all the trees plus an overgrown hedge about 4m away that has not been cut for 3 or 4 years and is now blocking out the evening sun.  Hazels have been planted or suckered around the outside of the bed and clipped to keep them under control. This has caused them to grow like a hedge so the whole area is very enclosed with very little light coming in.  When I weeded the bed on a windy day, very little wind came through the bed due to the proliferation of trees so it is not only dark but has very little air movement.

The soil is sandy and very, very dry. There is little humus on the top of the soil – even the ivy is struggling to grow there.

I have now cut the hedge but need to observe the beds over the course of the next year and look at the light and how much rain enters the beds.  I have on old rain gauge so I will stick that in the bed in the middle and see how much falls in there. I have another rain gauge which I can put in a different part of the garden that is more open to see how much falls on the plot to compare it with. 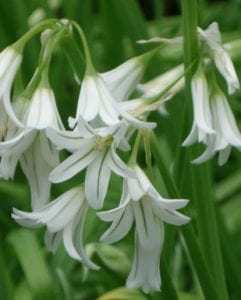 This phase demands that we find out about the site in more detail, its geology and history, how the watershed works and take photos of it during different seasons.  It is time to study the species and find out more about it and what its function is.

Exmouth is the start of the Jurassic Coast and has the earliest geology of the coast. The cliffs which are about a mile away are from the Triassic Period – 250-200 million years ago. The soil is very stony – often round water-shaped pebbles. During the triassic period the climate was like that of the Sahara Desert today. Seasonal flash floods swept large quantities of sediment into the valleys and the plains fringing the deserts and both the red mudstone and the pebble beds found in east Devon are classic examples of  deposition.  We don’t have the mudstone but we do have the pebbles.

Jumping forward a lot, the allotment site has been a set of allotments since the first world war and although there is little written about it, prior to that it was part of the land that was agricultural in its use.

Allium triquetrum it a native in the Mediterranean basin – south-west Europe, North western Africa, Madeira and the Canary Islands where it grows in meadows, woodland clearings, riversides and roadside verges.  It appears in disturbed forest and shrubland and is an early incomer where land has been sprayed or cleared. It is tolerant of many conditions, including some salt, making it common in coastal areas. 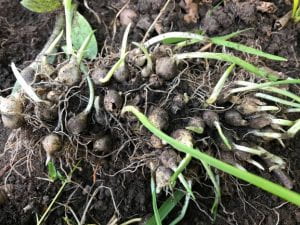 The plant has both male and female parts and so you only need one!  The bulbs produced are deposited on the soil where the roots pull them underground, deeper and deeper. The seed can be dispersed by wind and sometimes by ants.  I must admit to not having noticed seeds so will look for those next year.

Every part of the plant is edible. The leaves, flowers and bulbs and can be eaten raw or cooked and it is particularly useful because it is just starting to come out (in October) when things like chives and spring onions are finishing.

Have you ever had to deal with this plant or another invasive species? How did you do it?

A new addition to my plots

All this time in lockdown and you would think that I had had enough time to write a blog post or two wouldn’t you?  Where has that time gone? Days seem to have slipped by all running into one as there has been little to punctuate the time in any meaningful way.  It isn’t true that NOTHING has happened. One of the things that has is my taking on another plot on the allotments next to my current two.

The Wildlife Trust used to use the plot as a demonstration garden to show people how they could have a wildlife garden in a normal sort of garden space. They have sadly had to give up the plot and so I have agreed to manage it – not change it from a wildlife plot.

It has all sorts of things on it: a large flower border, apple trees, hazel, a pond, sitting areas, a great bug hotel and beds that are a little empty at the moment but can soon be filled.

I have said that I will run the plot along permaculture principles which most allotmenteers would be very familiar with. Principle number 1 is observe and interact so I thought I would go and have a look around and see what is flowering/seeding/berrying at the moment as we have lots of beekeepers on the plots.

What is flowering in September? 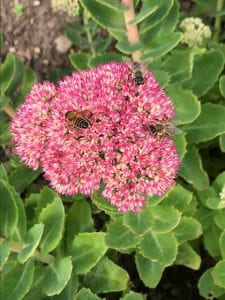 I think this is Sedum Spectabile and the bees love it. 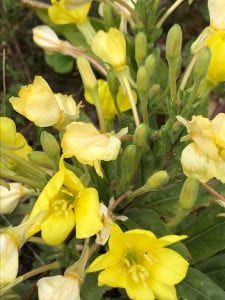 Oenothera or Evening Primrose for Hawkmoth, parasitic moths and bees. 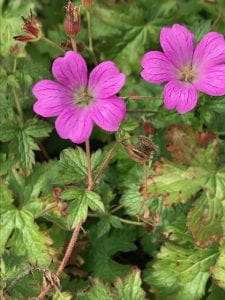 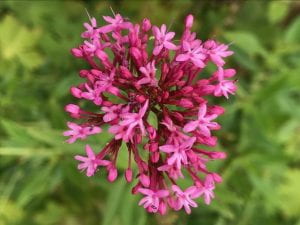 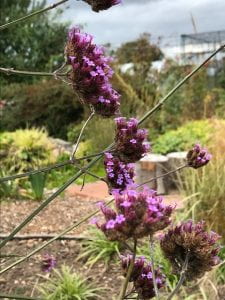 Verbena bonariensis loved by hoverflies, butterflies, bees of all sorts and sometime dragonflies. 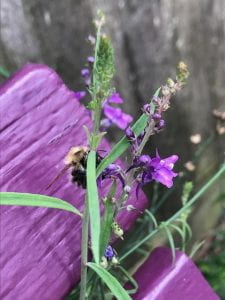 There are also some lone flowers on an Osteospermum, Potentilla and Rudbeckia but they are not in their prime.

I wonder if these flowers are enough for this time of year or whether we should have more flowers.  Perhaps some asters, single flowered dahlias and colchicums.