If you build it, they will come part 3

The Brownfield Site bed has now been emptied. It had about 8 Hylotelephium, probably Autumn Joy, in it which insects love. In late Summer it was covered in bees, hoverflies and wasps and if I could only have 5 plants for insects this is one that I would choose to keep. The other 4 would be Skimmia japonica, Cotoneaster horizontalis, Echium vulgare and Solidago. This meant that I didn’t want to get rid of them, just divide and move them so now we have them grouped all over the garden in the Thugs Bed and there is plenty to give away to the rest of the allotment site. You can read part 1 and part 2 of this series to find out what my ultimate aim is.

Whilst I was working on the hylotelephia (is that how you do the plural?), I disturbed a common plume moth. I have seen them before on the site and they are quite distinctive with those small wings. They look a bit like a miniature stick insect.

The first thing I wanted to build was a log pile on end. I only needed 4 or 5 fairly sturdy logs which I have after we had some tree cutting on the site last spring. I dug a round hole, stood them on end and then moved the soil back to bury them.

The log at the back had been lying down on the bed for a couple of years I would say, so I stood that up as well because it will have a lot of the sort of life that we want in it already and it will mean that the wildlife we want in this area is already here.

At the bottom of the picture you might just be able to see some stones and concrete rubble. I am making a river of these from the log pile to the edge of the bed, which is south facing, so that invertebrates now have 3 types of habitat in close proximity – wood pile to live in, stones to live under and to bask on in the sun and some bits of bare soil around them. This is all part of building the structural complexity and diversity that invertebrates need. Round, water-shaped stones are something we have a lot of in our soil so it shouldn’t take me too long to complete that part.

The plants in this bed are all going to be yellow and white so I have a Libertia grandiflora to plant behind the pile – in my garden they are in almost full-time shade and at the side a bushy honeysuckle I nipped a cutting off on my morning walk. The flowers are yellow and white and heavily scented so will be delicious. I am planting it in the shade of the logs and hope that it is not too sunny for it. If it is, I will move it.

It is a start. What projects are you working on?

If you build it, they will come part2

Brownfield sites have become a lot more important recently. They are sites where there has been human disturbance, can have old buildings, piles of rubble, uneven ground and many different habitats relatively close to each other. Canvey Wick in Essex is a prime example, situated along the Thames and built to process petroleum but shut down before it ever opened. It is now a Site of Special Interest because it has such an enormous biodiversity and is referred to as a ‘brownfield rainforest’ – rainforests being some of the most biodiverse areas in the world. Often, these places have drought-stressed, nutrient poor soils which can be contaminated but they are ideal for not letting any one species of plant become dominant. They often have bare ground which enables invertebrates to warm up quickly in the sunshine. They can often have slopes and different types of soil, some of which may be compacted. All of this offers a refuge to invertebrates who often need two different types of habitat to complete their life cycle.

And why is this so important?

I have an empty bed on the wildlife plot which I haven’t really known what to do with it. Last year I put a planted wheelbarrow on it but that won’t do this year. So, we are clearing it and going to make it into a more varied landscape for invertebrates. The soil is quite poor – no compost has been added for some years now so that is a good start and it has a slight slope on it. I am going to put a path through it that doesn’t have wood chippings on it just to vary the soil – it will just be compacted soil.

To change the topography (to put it another way, to add some hills) I am going to build mounds like the one in the picture. This is a large circle edged in steel with soil dug out. In the bottom is logs and then grasses, twigs, water piping, corrugated iron all covered over with brick rubble. This is specifically built for any and all types of invertebrate. Another mound will be fine sand – probably at the front of the bed to soak up the sunshine as it is south-west facing, and the third one will have logs on their ends built into the soil at different heights with stones cascading down from it to the south. This will create what is called an open mosaic habitat. In between the mounds I will plant verbascums, cow parsley, fennel, poppies and other plants that I can find but with bare soil visible like brownfield sites have. The bed can then be called The Brownfield Site as each of the beds has a name!

I’ll post pictures as we create the bed. You can see part 1 and part 3 of this series here.

If you build it, they will come: part 1

There is a fantastic video from Grassroofco, ostensibly about different substrates for growing particularly on brownfield sites and in urban areas, but I loved his images. I found his message loud and clear: structural complexity and diversity is one of the most important elements for biodiversity. We have quite a lot of different habitats on the wildlife plot but we can always fit in more so here are some of the ideas that I have taken from the video. 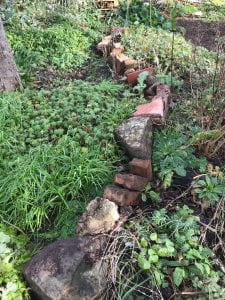 My first idea is to build a dry rubble wall that snakes through the Thugs Bed. I did start to build it at the front of the bed but then had a nightmare about children falling on it and cutting themselves open – easily done as it has sharp edges. So, after much thought I have moved it into the bed where it will probably be much more suited to the bugs. The bed faces south so the wall should warm up in the sun and critters can sun themselves on it. It’s not really warm enough at the moment but it will be.

This picture shows the first part and because it is made of different materials, it should provide a greater diversity of materials in the garden and therefore niches.

This is only about a quarter of the finished length but we are working hard to remove some of the Vinca major to allow other plants a chance. If we find that it is not high enough in summer once the plants have grown, I can make changes to it to increase the height. 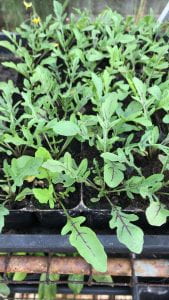 Judging by the posts I see on allotment and vegetable growing Facebook posts, we are all trying to reduce our use of plastic, me included. However, there are some things that are just best made in plastic, what you don’t want is for it to be one-off plastic.

I have tried many types of seed sowing trays, containers and pots over the years. I have root trainers which I find very useful for cuttings, sweet peas and broad beans but they are very flimsy and most have broken. Two years ago, I found Containerwise through Charles Dowding and bought some of their seed sowing modules. I don’t use the size CD uses but one size bigger. They are fantastic, made out of rigid plastic and said to last 10 years although I think they will probably last longer.

When I was looking for a replacement for the root trainers, I found these deep propagation trays  and these. I am going to get 1 of each to try them out this year and see what works best for my needs. I am also going to try these rubber root trainers that are supposed to last a life time.

I am also going to try these silicone seed modules that look and feel just like my silicone baking trays. They are reputed to last a life time and it is supposed to be easy to get the seedling out of the tray.

The downside might be that they are a bit floppy to carry on their own so will need a tray underneath them and they are more a transplanting rather than seed sowing size.

What do you use? 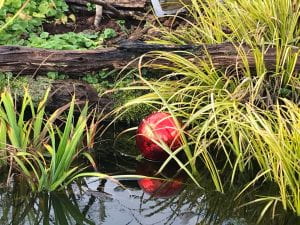 Christmas decoration in the pond.

A Happy New Year to everyone.

I can always tell when I have too much time thanks to the rain because I try and organise myself and the coming vegetable year. I am doing this even though I have not yet got my broad bean seeds in yet. Oh dear! Anyway, there is a reason for that – my greenhouse is full of loft insulation and I can’t get in to it to do anything. So, here are my top tips which I am going to do this year:

What do you do to keep yourself on track?