On the 6th of November I created a compost heap and followed the Berkeley method of hot composting as I was sceptical that it could be made in that time in November in the UK.  Well I was partially right and partially wrong! 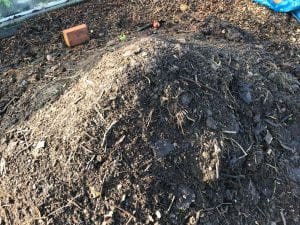 These pictures show you how the compost looks now and I can’t deny that it looks a lot like compost that is ready to use. There are a few elements that look like they originally did and I removed those as I spread the mound over the bed.  I made it on the bed I am using it on to save barrowing ‘stuff’ around and because I would have to find space if I didn’t. However, the heap did not heat up anywhere near the necessary temperature so I would say that means that the weed seed in it is still viable and will grow when the conditions are right.  I will come back and update this post when I know how that goes.

I can think of two reasons why the heap didn’t heat up.

To prevent the weed seeds germinating, I have covered the bed in woven black plastic that I keep for just such an issue. (No need for a picture of this. You can all imagine it!) For some reason, an overwinter cover seems to inhibit weed germination once the plastic is removed.

So, I will gather all the stuff together for another heap. I have a cleared bed I can make it on and try to remedy these three problems. I wanted to make a heap each month but it might take me a little longer than a week to get enough green. I am going out on a nettle hunt over the next few days to see what I can find and I probably do have some weeds somewhere! I could also cut the lawn on a dry day.

One other thing I will do differently in the next heap is to think about what I include. When I looked again at Geoff Lawton’s video it did all seem to be leafy material, both green and brown, rather than twigs, large clumps of grass etc. I can put those things into my cold heaps where they will rot down. I will document more clearly what goes into my next heap and by the end of 2021 I should have got to grips with hot composting.

See the results from December here.

Have you tried this method of composting? How did it go?