Last week I wrote about all the maps needed for my Permaculture Design Certificate but they were only about 2/3 of the maps needed, so this week it is the final maps with the actual plan on it.

Having decided where the water, access and structures are you are left with some space to fit in the things that you want. 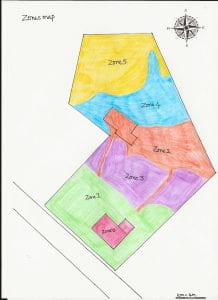 The next map is a Zone map. Permaculture works in zones with zone 0 being the house and centre of activities working outwards towards zone 5. The zones are about how often you visit the area so zone 0 multiple times a day but zone 4 you might only visit once or twice a year where the area is virtually self-managing. For example, there is a large walnut tree in the garden which does not need any maintenance other than harvesting the nuts making it a zone 4 area in this location.

As you can see from my map the zones do not have to go out in concentric circles as shown in the diagram probably because real life is not that neat!

I have to admit to drawing this map after I had completed my final plan for the garden. I am not quite sure how you can do it before hand. 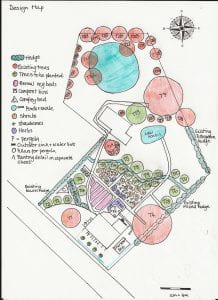 And finally, we get to the plan itself. At this point you can definitely say that you know this plot of land well and so placing of the elements that you want is quite easy.

There is a small food forest planted around the swale with fruit trees, bushes and shrubs, some permanent vegetables and spreading herbs. In front of this, in pink, are the annual vegetable beds in straight lines so that they can be easily covered over winter. There is a windbreak hedge in front of the veg beds and then willows in front of that to soak up as much water as possible before it leaves the property.

In front of the house are 4 apricot trees placed to soak up the sunshine. 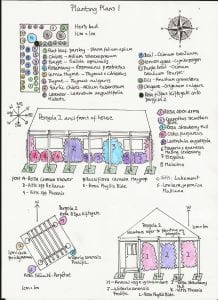 Not all of the plants can be identified on this plan, they are just too small to show so there are some planting plans to go alongside it.

The first set of planting plans shows the herb bed around the pergola and the pergolas around the house.  Plants have been identified on the plan so that everything can be seen at a quick glance. 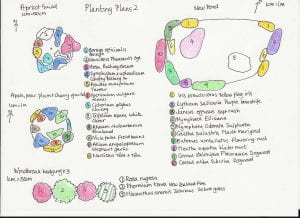 The second planting plan shows the pond, the windbreak hedge and the tree guilds, again with plants identified on them. Each diagram has its own compass and also has its own scale identified because they vary.

What I did feel at this point was that it was important to be quite specific about the plants, I didn’t want to come back to it again later, and it was a requirement that we provide the latin name. If you just list a walnut tree, a black walnut will have a very different impact on your planting plans to an English walnut. (Black walnuts have a substance juglone which they release in the soil and which kills some other fruit trees off such as apple, pear and plum.) 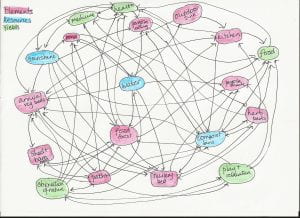 I also created a connections map because there are several concepts in permaculture such as each element having more than one function, using niches, stacking functions, use of edges and many others. I probably should have included this in my submission because the feedback was that I was a bit light on connections in my description of my plan. Below, I list an example of some of the concepts:

Elements having more than one function: Grass paths through the forest garden

I have to say that this whole process took hours and of course, if you make a mistake with hand drawn maps you have to draw them again. I did use Tipex on several occasions. So, I have started to learn how to use Inkscape as it seems that many people use it to create their plans. I have managed the first three maps so far!

Have you ever drawn plans or do you create as you go along?