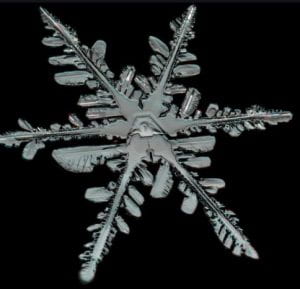 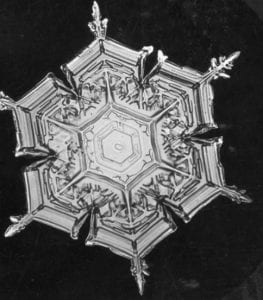 In nature there are a limited number of patterns but an infinite number of variations. Take a snowflake: there are no two snowflakes that are the same although they are all formed in a similar way.

The air temperature and the humidity, to some degree, determine the basic shape of the snowflake. We get needle-like crystals at -1.6°C and flat, plate-like crystals at -15°C. The shape of one arm of a snowflake is determined by the atmospheric conditions as it falls; the temperature or humidity might change as it falls and this affects how the water crystal grows and also explains why the six arms are identical. They all experience the same conditions at the same point. Anyway, these patterns are symmetrical and fascinating, so what about others.

I am going to look at three patterns in a bit more detail: branching patterns, explosion patterns and spirals. 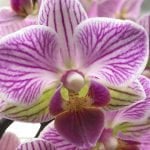 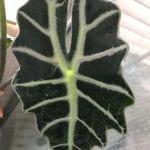 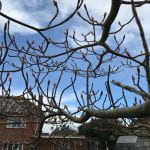 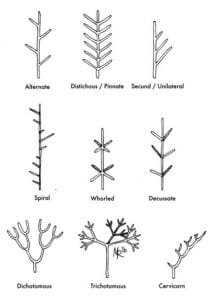 With thanks to Meghan Rocktopus

Branching patterns (sometimes called dendritic or fractal patterns) can be one of the easiest patterns to spot. They can be found in leaves, roots, rivers and our circulatory and nervous systems to name but a few places. Looking closely at the three photos taken of plants inside and outside my house, I can see that they have slightly different ways of branching. A little research on the internet suggests that there might be 19 different branching patterns. The Alocasia looks more like a distichous or pinnate branching with the orchid more of a dichotomous branching and the Cornus a trichotomous. This isn’t really important knowledge for permaculture purposes, just of interest to me.

Branching patterns are found where there is a gathering and dispersal of materials or energy. At a micro level they are essential for the efficient exchange of  gases and fluids with the environment due to the maximised surface area.

So how could we use these as permaculture designers? Branching patterns are well-suited to roads and paths where something needs to be distributed across a wide area. Branching patterns can also relate to the organisation of people such as a large, hierarchical company where who line manages who is depicted. For an example of a branching pathway (cervicorn – branching like antlers) used in a permaculture design see p11 of Mobile home garden design by Aranya. Look on the right-hand side of the design next to the decking. 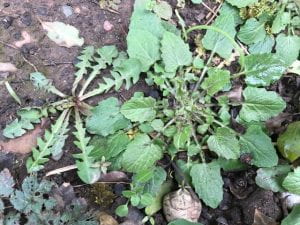 Weeds in my garden!

Back to the snowflake patterns which would fit into this category. The image shows two weeds in my garden that both have an exploding pattern in 2d with the leaves lying flat on the ground. You can see how they layer over each other in the weed on the right (I’m not sure what it is called) and in fact it is almost symmetrical with 10 leaves on the lower layer. It is obvious how the arrangement of leaves allows it to gain maximum sunshine and I do wonder if it does well in slightly shady spots where this photo was taken. There is a very direct route between the central point and each external point  in complete contrast to a spiral where the central point is a long way away from the end point if you follow the spiral around.

This explosion, however, is the dried flower of Allium x ‘Globemaster’ with some seeds left in the seedheads. The flowerhead is made up of hundreds of little flowers in a beautiful purple during late May early June.  It is an excellent example of a pattern within a pattern within a pattern because it is an explosion making a sphere with some branching at the end of each individual flowerhead. You get a really clear picture of how the seeds are dispersed all around the plant, some near and some slightly further away.

So, how can we use this pattern in design? This is an image of La Ferme du Bec Hellouin in Normandy, France. Below the polytunnels can clearly be seen an exploding pattern set of beds all coming off a central point. Often in walled gardens there would be a well or water store in the centre of this type of pattern, making it quicker and easier to water the beds – or nowadays a tap on a standpipe from a gravity-fed reservoir on higher land. This link gives a closer view of the bed.

These are another type of fractal pattern frequently demonstrated through a snail shell, sunflower head, climbing tendrils on sweet peas and in weather systems. 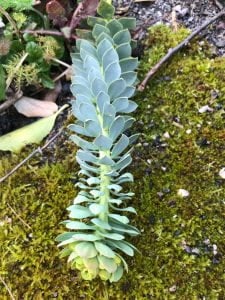 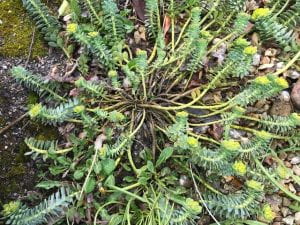 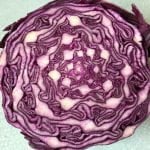 The euphorbia above has a spiral in a spiral. First the leaves spiral around each stem and then each stem spirals out of a central point. I did wonder if the whole plant was an example of an explosion but the stems curl round rather than being straight so I am putting it in the spiral group, not unlike weather patterns. The spiral arrangement of leaves on a plant is to ensure maximum exposure to sunlight and for the seeds. Spirals are able to capture and slow down energy such as in a herb spiral, that ubiquitous permaculture plant bed. To be fair, they are space-saving and allow for different types of herb to be grown, making use of the different amounts of moisture in different parts of the bed. 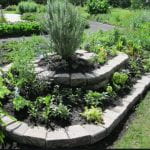 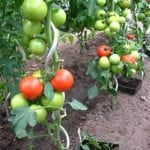 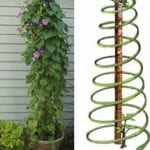 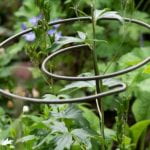 So how else can we use spirals?

I have a number of spiral plant supports which I use for tomatoes in particular. They are tall, narrow spirals which you can twist the stems around as they grow. But there are also other spirals that can be used as plant supports. The third image shows a support that allows climbers to go up and the final one supports flower heads. I use one of these on a peony. 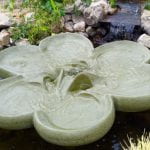 A vortex is a spiral where the air or water swirls around and anything caught in the motion is pulled into the centre. One place where this can be used in the garden is in free flow water features to aerate the water. They are based on an idea from Rudolf Steiner and shown through Drop Test Pictures developed by Theodore Schwenk. Water moves in patterns down a river and creates patterns when a drop is released. Pollution in the water will change the patterns formed so tap water gives a different and lower quality pattern to water fresh from an unpolluted stream. The free form fountains mix water and oxygen together providing support for organisms to break down pollutants and is reported to increase and stimulate plant growth.

Do you use any patterns from nature in your garden? 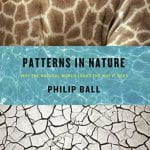 A book I have bought to read as a result of this module on patterns in nature is Patterns in Nature: Why the natural world looks the way it does by Philip Ball.