Module 5 of the online permaculture course is all about climate. It’s important because climate helps to refine a design. But how does it do this?

Knowledge of climate can help us:

It is often said that Britain doesn’t have a climate, it has weather. Friends of mine from the centre of France only understood why the British were so interested in the weather when they lived here. In France where they lived, the weather was fairly consistent from day to day and over the seasons. In fact, the weather used to be set for day after day after day whereas here we can have rain, shine, snow and a storm all in one day.

So, what determines climate?  There are seven factors which affect climate: Latitude, ocean currents, elevation, topography, near by water, prevailing wind and vegetation. 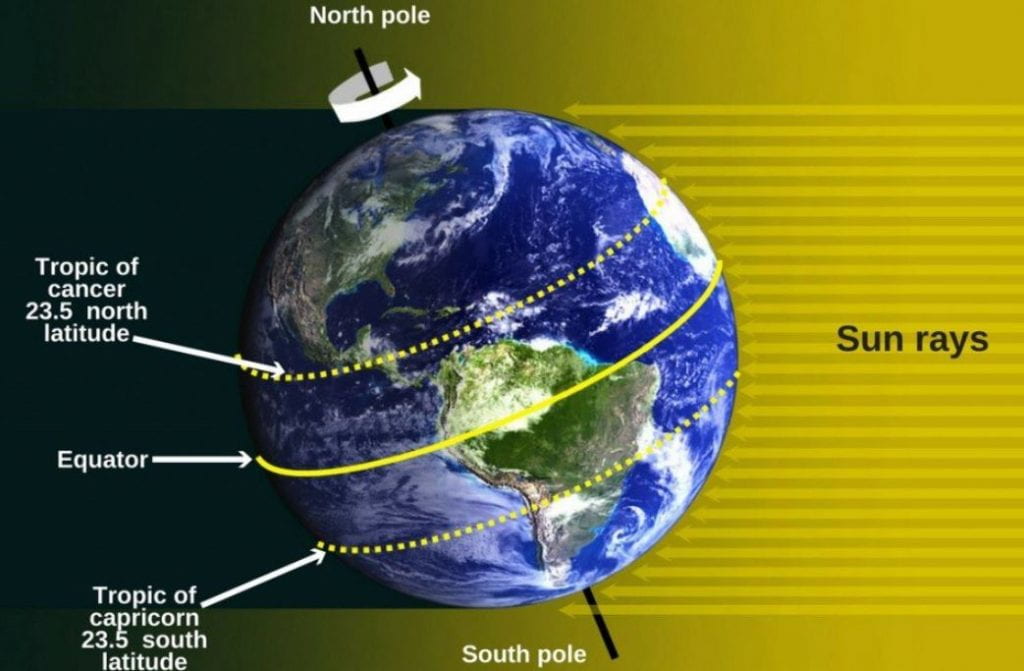 The nearer to the equator the the more sun  because the sun hits the equator more directly and in a more concentrated manor. The earth is tilted 23.5 degrees on its axis and this means that for half the year the north is tilted towards the sun and then away from the sun (and vice versa for the south) so the rays hit the earth at a different angle and intensity than they do at the equator. The latitude of the equator is 0° and for the Britain 50°  (Cornwall) to 60°  (Shetland Isles). Exmouth is 50.6°N.

Ocean currents are a very important element for the climate of Britain. As a small island, in comparison with Europe, we are very affected by them. A line drawn from London around the globe would pass through southern Siberia and near Hudson Bay in Canada yet London is much milder in winter. The reason for this is the ocean current, specifically the Gulf Stream which brings warm water from the Caribbean.

Devon has the longest coastline of any region in the UK, having coastline on the north and south of the county.

Topography is how the geography of the place affects the weather and ultimately the climate. Hills or mountains can create rain and the weather can be different on the windward or leeward side. There can be a funneling of winds due to the shape of the land and a large body of water such as a lake or reservoir can also create milder temperatures.

The west of the UK is higher than the east through plate movements many, many years ago. The prevailing winds are south westerly and this means that there is a lot more rain in the west compared with the east. However, Exmouth is in the rain shadow of Dartmoor as evidenced by the comparison rainfall chart for Princetown on Dartmoor , windward side of the moor and Exmouth (leeward side of the moor). Our rainfall is about half or less of that in Princetown. 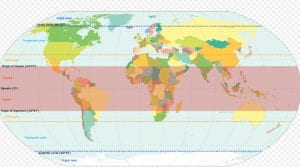 The nearest place to Exmouth with a different climate is Gran Canaria which has a sub tropical climate with hot summers and mild winters and is a place many people from the UK visit in the winter.

This is a climate classification system based on the vegetation that grows in a place because plants depend on temperature and precipitation to grow. There are 5 climates – A. tropical, B. Dry, C. Temperate, D. Continental and E. Polar.  These are then divided into sub-categories according to level of precipitation and then the level of heat. The UK is Cfb which is temperate (or ocean), the f stands for no dry season and the b is the temperature of each of four warmest months 10 °C or above but warmest month less than 22 °C. Using maps based on this system from 1901 to 2010 it can be seen that there is an increase in aridity across the world and a decrease in polar regions.

The USDA hardiness zones are used world wide to denote the type of plants that will grow in that region. Most of the UK is zone 8 but here in Exmouth we are in zone 9 meaning that the lowest average temperature is -6.7°C.

The Royal Horticultural Society (RHS) has its own hardiness classification but applies it to plants rather than locations. It works on the theory that we all have microclimates in our gardens and therefore can place a wider range of plants than one overall rate of hardiness might suggest.