10 things I didn’t know about soil 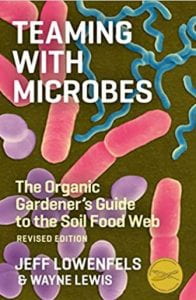 I was given  a couple of books for Christmas about soil. I read the fun-looking one a while ago but left the more serious one, Teaming with Microbes by Jeff Lowenfels and Wayne Lewis,  and have only just got round to it. It turns out that you shouldn’t judge a book by its cover. I learnt masses from the second book so here are my top 10 amazing facts.

There are a variety of actions that can develop bacteria and fungi in the soil – adding compost, mulching (or combine the two and mulch with compost!) and using actively aerated compost teas. I am still getting my head around these teas – they involve an air pump or being stirred for hours and so are not for the faint-hearted.  What is easier to understand are the actions can damage the soil food web.

If you are interested in the soil food web, Dr Elaine Ingham is the queen of this science and her How it Works videos explain the processes much more clearly than I can.

I am going to have to read the other book written by Lowenfel and Lewis – Teaming with Nutrients.