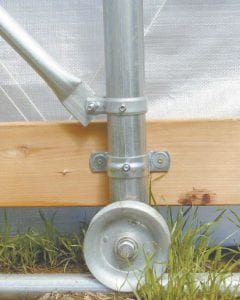 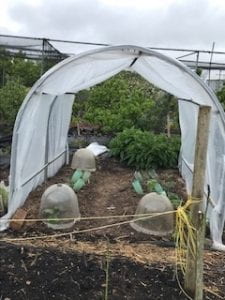 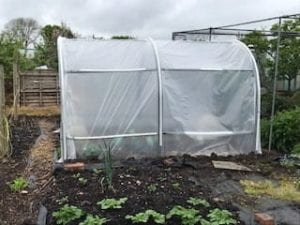 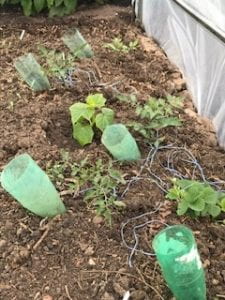 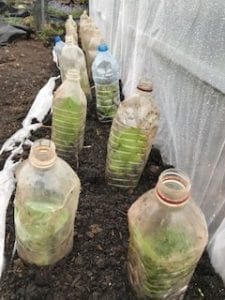 I can’t believe it is nearly a month since I wrote the last post on the blog. In that time everything has started to grow and the weather is currently quite warm: the polytunnel needs frequent watering.  this week has been a week of planting out so that I can make a bit of space in my greenhouse and sow more seeds! 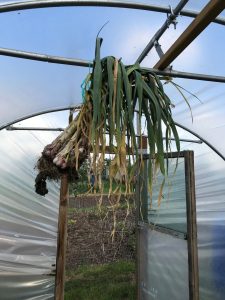 To my surprise, the garlic in the polytunnel had started to bolt.  Last year, I planted all of my garlic outside and each clove sprouted due to the cold and then hot then cold weather. The bulbs were very small and it really wasn’t worth it. This year, I decided to plant half in the tunnel and half outside.  The half that is outside is not ready yet but this lot was.  I pulled it, strung it up to dry out and planted some aubergines into the space they left.

The heads on these are a reasonable size and so I will save one or two to grow again next year.  Some people on the allotments have been planting garlic that they have kept for years and now have plants that are especially adapted to their soil and watering conditions. 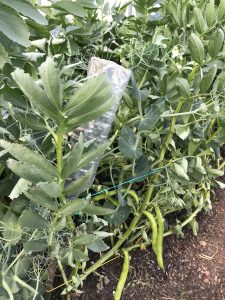 The broad beans have started to produce and I have picked a kilogram from the tunnel again. They were small, juicy and tender and we ate them in salads and as a vegetable with small carrots and asparagus.  We are eating a lot of asparagus at the moment. So much so in fact that I might have to try and freeze some. It would be great to have an asparagus omelette in the summer or to include some in stir fries throughout the year. 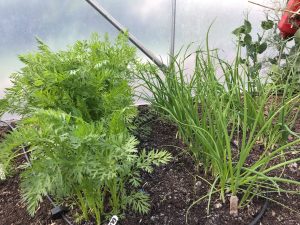 It is the first year that I have grown spring onions, red and white, and they are doing well. I keep thinning them and eating the thinnings in stir fries. The carrots are also bushing up and starting to thicken so these are also being thinned and eaten.  My carrots outside have not germinated particularly well so my next visit to the plot will involve resowing both carrots and parsnips. 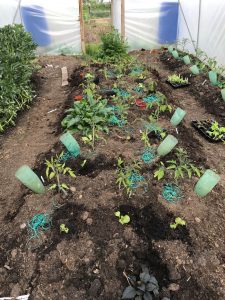 The main job this week has been planting out in the polytunnel.  I have a lot of tomatoes to plant: Costoluto, Sungold, Zlatava, Black Krim, Green Zebra, Tigerella and Black Cherry. You can’t have too many tomatoes, can you?  I have interplanted several varieties of lettuce and am hoping that the tomatoes will provide a bit of shade for them until it gets too hot in there.  I also planted lettuce outside around my courgettes which should stagger production. 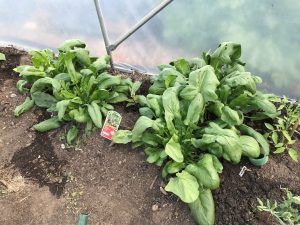 The spinach has been prolific and will very soon need to be pulled even if it hasn’t bolted: I need the space – there are more tomatoes to go in!  This variety, Medania, is supposed to be good in heat and drought so perfect for a polytunnel. I hate it when you have to take something out because you don’t have enough space.

What’s going well on your plot at the moment?

I have just finished listing all of the seeds I have for 2018 and am just wondering if I have too many. Of course I do but there is always something new that catches my eye.  Here are this year’s new seeds: 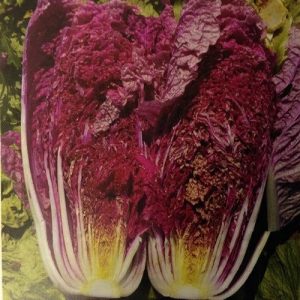 I saw this on Our Happy Acres on the posts that list what they harvest every Monday. I have not grown Chinese Cabbage before but what really drew me was the colour! I got the seed from Simply Seeds and I understand that they are best grown in the autumn so something to sow in June.  The packets says that they are frost hardy, not that we get a lot of frosts down here on the south coast.

I am not entirely sure how you cook Chinese cabbage. Stir fry? However, good ol’ BBC food has a selection here to get me going. 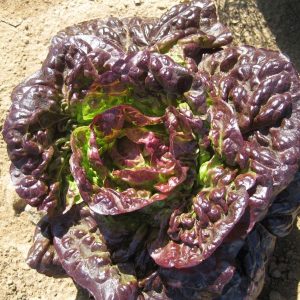 I think I might have a bit of a thing for red vegetables this year. This is a Little Gem type of lettuce that is said to be sweet-tasting and has good resistance to bolting, tipburn and mildew – all of which I need.  The interweb says that it can be sown from March to July so can be grown over a fairly long time span, the later ones probably better off outside rather than in the polytunnel. We eat a lot of salads in the summer – have you seen the list of lettuce I grow on the page at the side?  We eat tons – tons I tell you! This will add colour to the salad bowl. 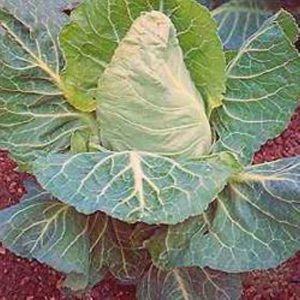 No this is not a red cabbage – ha! This is a cabbage for early spring to be sown in July or August. I can never grow enough of these so I am going to try this one outside and in the polytunnel to try and stagger the harvest. The thing that attracted me was the description that it grows well in well-drained soil and that is definitely what we have on our plots. Some might call it sand.  The 5cm of compost/manure I am adding to each bed every year as part of no-dig growing is starting to ameliorate this but I thought it was worth a try. 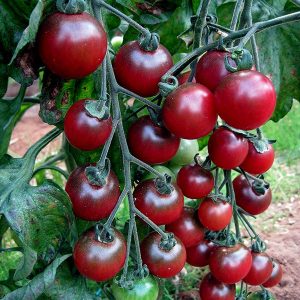 I can not lie! I know what I like in tomatoes and it is Black Russian, also known as Noir Crimee, Costoluto, Sungold, Tigerella and St Pierre and I have grown these every year for the last 6 or 7 years. I do also like to throw in Green Zebra every now and then and will do so this year just to give a range of colours. This year I am trying out a couple of new varieties just to see how they taste and crop – taste being the most important thing. This year it is  Rosella and Zlatava. Why have I picked them?  That is a really good question. I have to admit that it was more stick a pin in the page than a careful, thoughtful choice but she who dares wins as they say. Kings describe 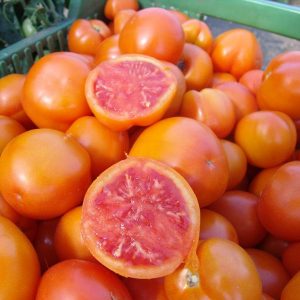 Rosella as a deep-pink cherry tomato (nearly red!) with the taste of blackberries, raspberries and other summer fruits. I couldn’t resist but I am a little doubtful. I will of course update you. Zlatava is orange on the outside and guess what colour on the inside?  I thought they might be an interesting. Kings do say that they have an excellent flavour.  We shall see.

What are you growing that is new to you this year?