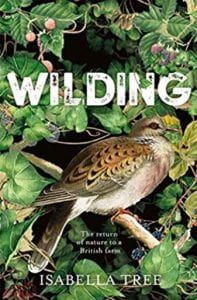 A volunteer who works with me on the wildlife plot suggested I read Wilding: The return of nature to a British farm by Isabella Tree. I hadn’t heard of this book but it was highly commended by the 2019  Wainwright Book Prize and so there is no time like the present to get started on it.

It is a fantastic story about wilding the Knepp Estate,  a mixed farm, which through grants and lack of money became the most amazing return to nature with a little help from the owners. The one thing the book does really well is show the inter-connectedness of everything. So, rather than write the normal sort of review, I am going to record some of the elements which were new to me or amazed me.

This is such a fantastic book, jam-packed full of interesting, slowly evolving rewilding observations. The big take away from it is that nature does it best; not the big, well-known conservation groups although they have all done other good things. It is their lack of ability to take risks and to be at the forefront of different ways of working that is quite frustrating.

All I can say is the winning book of the Wainwright prize in 2018 must have been excellent.