I love a trial and so my big trial for the next 12 months is about making compost in 18 days and whether it can be done here in the UK. It is called the Berkeley Method, developed in California and explained here by Geoff Lawton in Australia.

Now, both of these places are warmer in general than here in November so I am not sure that it will only be 18 days before I have compost. I think it will take longer but I would like to give it a go so I am going to make a heap each month to see what happens. I will also make a cold heap and turn it out in March to use just to compare the two because the 18 day, hot compost is a lot more work.

I don’t really have the space to make more compost heaps so I have decided to make them on the beds and then turn them out and use them where they have been made. That way I cut down on the amount of barrowing around that I need to do.

The materials I have used are cow manure, carbon to nitrogen ration 20:1, grass clippings 25:1, shredded raspberry and blackberry canes 400:1, chopped up leaves 150:1 and weeds 25:1.  These are approximate ratios and I wouldn’t normally bother with this but it just shows that I need to add more of the green stuff to try and get nearer to a 30:1 ration. I have layered them and guessed that I have about the right volume. In the middle I have put an activator of comfrey leaves, about 2 litres because it is November and may be slower to get going.  I am interested in the idea that we are not aiming for a drop in size of the heap but really to get the carbon to lock up the nitrogen to be released for organisms in the soil when it is finally spread.

I will be back in 18 days with the results. 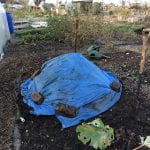 The compost heap built and covered on the 6th of November.

An update on the heap 20 days later can be seen here.  See the results from December.